In 1987, in a period when Milanese fashion stores were mostly focused on offering sartorial classics, Claudio Antonioli opened in Piazza Lima a shop of a different kind. For the first time, he brought together a number of avant-garde brands that were still largely unknown and hard to find, even in Italy’s fashion capital. This innovative formula proved to be a hit, and over the years it led to the opening of other Antonioli stores in Ibiza, Turin and Lugano. Then in 2002 came the launch of antonioli.eu, one of Italy’s first fashion e-commerce websites. In the last three decades, Antonioli has forged a new definition of the profession of fashion retailer, one with a cultural twist. By systematically representing cutting-edge, emerging brands in his portfolio alongside already established and easy-to-sell labels, he has shown that a fashion store owner, in the manner of a gallerist, can also promote the circulation of new ideas, besides selling mere merchandise. Antonioli has also blurred the traditionally rigid line between the roles of fashion distributor and producer. Following an astute intuition – that streetwear and high-end fashion would one day be the same – the Milanese businessman decided to give his financial backing right from the start to two of today’s most successful street-inspired luxury labels: County of Milan by Marcelo Burlon and Off-White by Virgil Abloh. On 8 August, the holding company that operates these brands – New Guards Group, which Antonioli co-founded in 2015 with his business partners Davide de Giglio and Marcelo Burlon – was purchased by the luxury shopping platform Farfetch for the staggering sum of $675 million.

When did your passion for fashion start?

I inherited my love of clothes from my parents, who were fashion shop owners in Milan. When I was a little child, I spent hours playing in the back shop, surrounded by clothes. At the age of 28, I decided to follow my father’s example and open my shop.

What made your first shop in Piazza Lima so special?

Its research-intensive, multi-brand nature. I brought together some of the new brands that intrigued me the most at that time, like Dries Van Noten, Ann Demeulemeester and Rick Owens.

They’re all big names today, but in the late 1980s, they were still up-and-coming – all brands that my parents, for obvious generational reasons, had never heard of nor were able to understand. More recently, this fascination for the avant-garde, which fortunately has never abandoned me, has led me to welcome into the family two of the most disruptive designers of our time: Raf Simons and Demna Gvasalia of Vetements.

Were you rewarded immediately for leaving the beaten path?

On the contrary, the first few years were very hard! I wasn’t even able to pay myself a decent salary. Many nights, I had to stay up late, alone in the shop. And because back then I had no assistant who could stand in for me during the shop’s opening hours, I had to rush to buy clothes during the lunch break, skipping lunch.

What other memories do you have dating back to these bohemian beginnings?

I remember that the night played a central role back then, in both my personal and in my business life. I was a passionate lover of house music and used to go to parties in Milan and all over Italy. My passion for nightlife has never abandoned me. Three years ago, I opened a disco club in Milan called Volt, turning an old dream into reality.

You have declared that “fashion and music share the same nature”. What exactly do you mean by that?

They have the same adventurous spirit in common. Fashion designers and DJs share the same thirst for the unusual, for the less obvious, which urges them to devote themselves to a life of research, not dissimilarly from us fashion buyers. It’s no coincidence that most DJs, besides their passion for music, also share a love of fashion. Luckily, in my life, these two passions have always worked symbiotically, giving each other a hand. When I opened the shop, my frequentations of Milanese dance clubs really helped me in establishing a name on the creative scene. My “night-time acquaintances” would also come to the shop during the week in search of exciting outfits for the following weekend’s party, which significantly helped my business stay afloat. In turn, my name on the fashion scene today brings a clientele to my club that I wouldn’t have otherwise.

You believed in multi-brand stores, then in e-commerce and, more recently, in the potential of street- and sportswear to conquer the luxury fashion segment when most people did not. Instead of referring to this ability of yours to anticipate the future, when asked about the secret of your success, you answered: “My coherence.” Can you explain what you mean with this word?

Throughout my career, I have always allocated a substantial part of the budget for innovation. I guess it’s a question of character. I have always considered it boring to bet on the favourite horses in the race. Instead, I have always enjoyed being explorative as a buyer, also including less established, cutting-edge fashion designers in the portfolio who have artistic value but scarce commercial potential. That’s another big constant in my life: making fast money has never been my real drive.

Your words remind me of certain passionate gallerists who, every once in a while, present artworks by non-commercial artists, too, in the belief that they can make a positive contribution to the cultural discourse. These operations usually add to the “good name” of the gallery, paying off in the long run.

The same applies in the fashion retail world, too, I guess. Being faithful to one’s DNA, being generous, both with your clients and your business partners, leads to the creation of precious “reputational capital”. It may well seem less tangible at the beginning, but it always pays off at some point. I also feel a moral obligation to invest in and nurture new talent. I haven’t forgotten where I come from, or that, back then, those who made my fortune were relatively unknown, talented fashion designers.

A few weeks ago, you inaugurated a 200-square-metre extension of that shop, which boasts an eye-catching, futuristic design by Casper Mueller Kneer Architects, who have conceived several Celine shops worldwide.

It’s going to be Antonioli’s “Future box” – a place dedicated to the newest acquisitions, where I’m planning to showcase the most contemporary and youngest names in our portfolio.

How do you orient yourself among so many up-and-coming fashion designers? What criteria do you use to choose them?

I try to pick only real innovators: if a collection looks like a copy of another one, I don’t buy it. I also love to delegate and give credit to my collaborators’ intuitions. If it hadn’t been for the suggestion of one of my youngest buyers, I would have probably missed the opportunity to collaborate with Virgil Abloh and work together with him on the launch of a brand-new label. Some months later, Off-White came to life: without a doubt, it’s been one of the luckiest and most fulfilling projects of my career.

On 8 August, Farfetch bought New Guards Group, the Milan-based production and distribution company through which you had operated and developed Off-White from its infancy, along with other trendy streetwear brands such as Heron Preston and Palm Angels. What are your feelings about this acquisition?

I’m very satisfied. As proud as I am of the performance of New Guard Group’s labels over these past years, I had started feeling the urge to make room for new projects. We’ve been working on this deal for over a year.

Do you think there’s a risk of Farfetch imposing exclusive control over these newly acquired brands, and thereby preventing other shops, including Antonioli, from selling them in the future?

I cannot comment on their behalf. However, I can tell you what I would do in their place.

Farfetch’s core business lies in collaborations with the best fashion stores in the world. I don’t see why they would risk alienating vital business relationships with the retail sector by playing hegemonic games with it. Much more simply, this acquisition is rooted in a desire to buy young and healthy labels, so as to differentiate the platform’s activities and consolidate its position in the market.

What do you intend to do with the extra free time you’ve gained by selling the company?

I’ll finally have time to realise a project I’ve been putting off for years: building a kennel.

Animals are one of my many passions. I live with three dogs and four cats, all saved from the streets. I’m very serious about this project. Every Monday afternoon for the last four months I’ve been doing volunteer work in a dog shelter, getting hands-on experience of all the tasks necessary for its smooth running, including cleaning. Before opening a kennel of my own, I needed to get a deep understanding of how these kinds of structures work.

Will you continue to incubate new brands?

As the owner of Antonioli, I’m always in search of new talent. Marcelo Burlon’s County of Milan, Off-White and Unravel – New Guards Group’s first three projects – all stemmed from my activity at the store. I see no reason why I should stop helping young designers to develop their ideas now, both by backing them financially and by allowing them to benefit from extensive experience in the field. Nurturing these young designers’ talent from the very beginning, and seeing them grow, has filled me with almost fatherly pride and satisfaction in these past years. Conversely, the idea of buying “mere turnover” and acquiring already established labels has never attracted me.

Have you already identified any new game-changers on the horizon? Above all, can you tell us if you have discovered a worthy successor to Off-White?

Not yet. For some years, I’ve been seeing many brands repeating the same, well-tested schemes, but virtually none taking the risk of creating new paradigms. It feels like we are all waiting for the arrival of a new messiah who will show us a new way forward.

While waiting patiently for a new disruptor, is there a fashion designer in particular who makes your heart beat?

Raf Simons. His last men’s show moved me profoundly. There’s an element of freshness and craziness in his continuous evolutions that I have a hard time finding in his younger colleagues today. 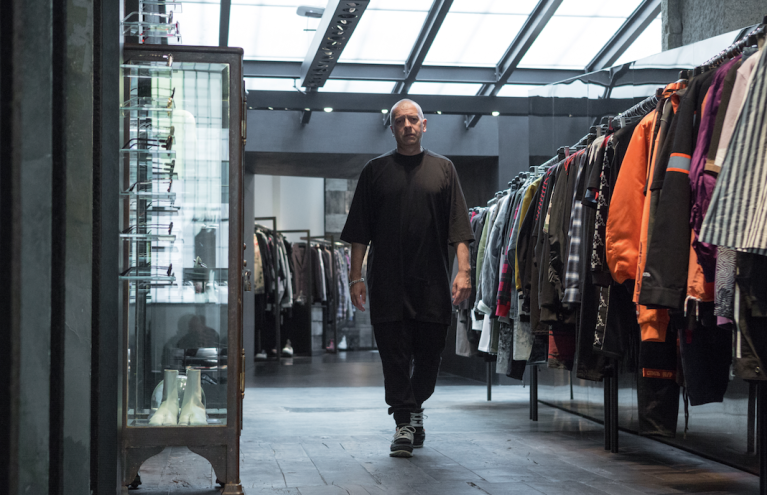