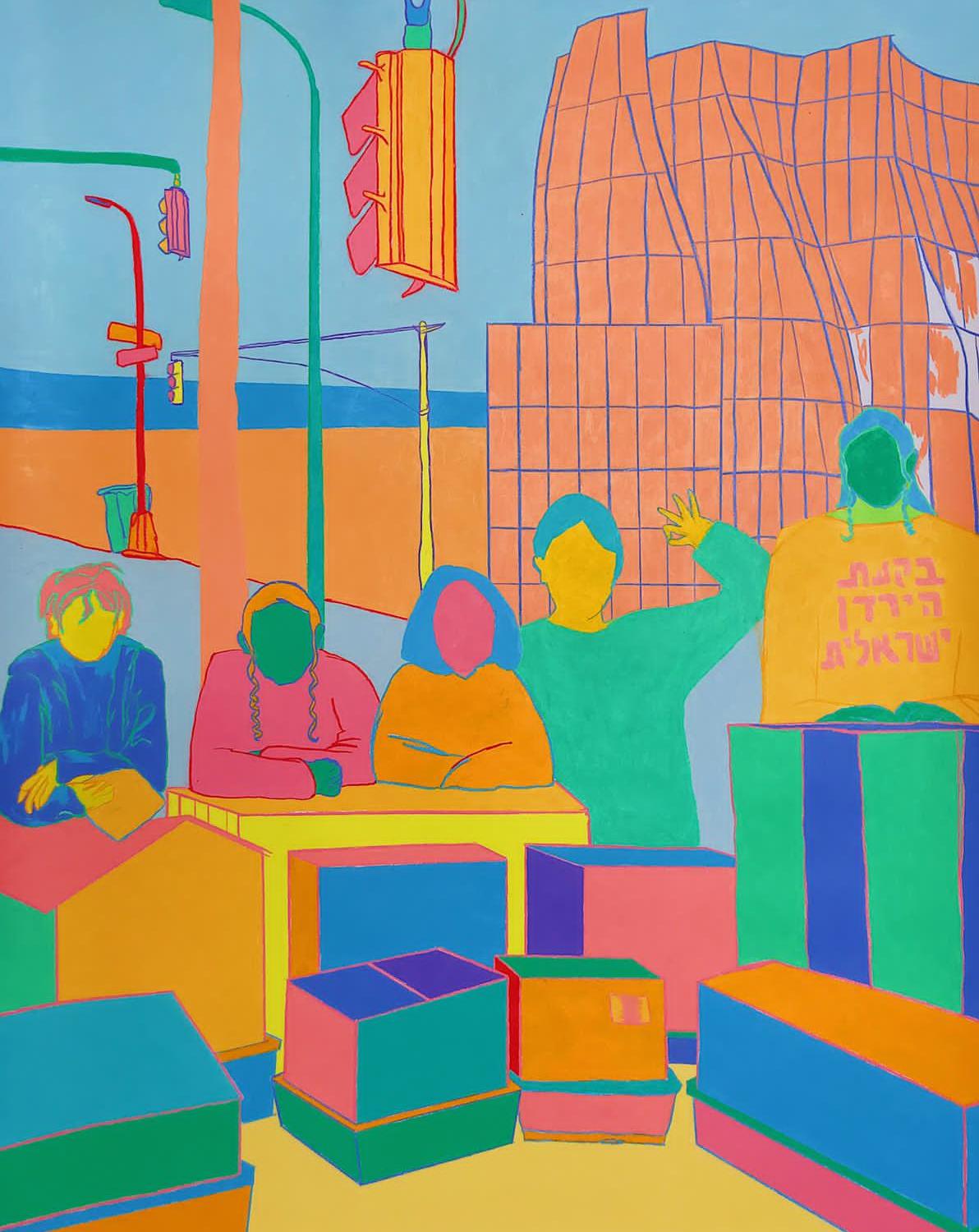 On a gloomy Berlin day, among the greyness of the surrounding buildings, Navot Miller’s atelier in Berlin-Tempelhof is a sudden epiphany of colour, making it impossible to miss. After welcoming me inside, the 30-year old Israeli-American painter, since seven years an adoptive Berliner, shows me several unfinished oil paintings he is currently working on – mostly portraits, painted with his contradistinctive vivid, comic-like colours, all invariably showing his equally contradistinctive mix of Jewish and gay imagery. Some of them will be exhibited at the St. Agnes Kunstmesse in König Gallery (3rd-13th June), while the others will be included in his first solo exhibition at Elektrohalle Rhomberg in Salzburg (17th July-28th Aug). “Art was actually my backup plan: my original plan was to study architecture in Berlin”, he confesses. “But three times I applied and three times I was rejected. Eventually, I was accepted at Kunsthochschule Berlin Weissensee. I didn’t immediately give up my dream of becoming an architect, though. This reflects in the subjects of my early drawings, dominated by geometric patterns and simple architectural structures, such as house shapes, trees and lamp posts.”

Navot Miller was born in the rural small town of Shadmot Mehola, a national-religious Israeli settlement in the West Bank, in 1991, to an American mother and an Algerian-French father. “As a child, I grew up in a conservative Orthodox community that followed strict religious rules, never feeling I could be accepted there as a homosexual. Although I received care and support from my family, since a very young age I told myself that if I ever have the possibility of trying to live someplace else, I’ll do it.”.  In a colourful zine containing a few short autobiographical texts interspersed with a selection of his early painted works, published on the occasion of his group show “Posts Paris Ass” at Palais de Tokyo in 2018, he dedicated a few lines to his hometown. Intentionally opting for an infantile, ungrammatical language, suggesting it’s his inner child speaking, he writes: “in shadmot mehola the light is too bright, too white. in shadmot mehola everyone is heterosexuals. in shadmot mehola who isn’t heterosexual doesnt live in shadmot mehola they live somewhere else”.“With its tolerant atmosphere and vibrant gay scene, Berlin was the theatre of a gay Renaissance for me – a real tsunami. Like Patti Smith says of New York, Berlin was for me the city that “de- and reformed me”.

He ascribes his unrelenting creative artistic drive in the past three years to the existential need to bring together the schizophrenic ends of his biography – the orthodox past, full of no-goes and tabus, and the secular, liberated gay present.

He goes on describing a visit to the Abgusssammlung Antiker Plastik in Charlottenburg, in 2018, as “the Road to Damascus moment” that marked a point of non-return in his artistic journey. “Appealing to my homoerotic taste, the muscular sculptures of Greek deities and heroes in the museum’s collection made a great impression on me. In the following days, I began drawing relentlessly those mythological athletic figures, often characterizing them as Orthodox Jews. This is best epitomized by “Apollo as a Jew” (Fig1), a wax pastel drawing that depicts the god engaged in a battle against the mythical snake monster Python, embellished with sidelocks (in Yiddish: Peyes) gangling down his head.

“This work is particularly dear to me: it represents my first conscious attempt to blend in my practice my Jewish religious background with my contemporary, sexually-liberated lifestyle in Berlin”. “Around the same time”, he continues, “I started combining childhood’s images with scenes from my everyday life today, attempting a cathartic conciliation between otherwise far-away, irreconcilable sides of my identity. Although no glue is involved, I like to refer to such works as collages — juxtapositions of images that otherwise would be unconnected in time and space”. In “The Millers and Zach” (Fig. 2), his former partner, portrayed while pissing, makes his unexpected appearance in the middle of a family trip in a natural park in Israel dating at least twenty years before.

In “The hamster club” (Fig. 3), he portrays a group of young kids from Shadmot Mehola in front of hamster cages, including himself, with Frank Gehry’s IAC building in New York and the Hudson River as a background.

“Around the same time, I started dealing with the documentation – or better, the “Jewification”, as I had done with Apollo – of my casual lovers’ bodies, usually starting with a snapshot taken on my phone after sex, which I subsequently transform into a drawing in my studio”. A good example of that is the homoerotically charged “Willi in Wedding before bed” (Fig. 4), where the naked lover’s reflection in the mirror portrays him as an Orthodox Jew.

In “Boy on balcony” (Fig. 5), a lover in underwear is smoking an after-sex cigarette on the balcony of a lakeside hotel; at a second glance, the balcony’s metallic bars appear strangely bent, forming a menorah.

The use of vibrant, pastel-like, neon colours, which since “Apollo as a Jew” became the artist’s painting style’s most distinctive feature, fulfils a similar conciliatory function, he explains. “I see bright, positive colours as a way to add a queer touch to my religious past”, he says while touching one of the two blonde-dyed Peyes running down his head “Yes, my Peyes underwent a similar queering process”, smiling. “A Jewish Orthodox embracing a secular gay lifestyle normally would cut them. I made them blonde instead, in the attempt of integrating this religious symbol into my gay identity”.

It would be reductive, however, to consider his peculiar, flamboyant use of colour as a mere queer signifier. Deliberately unrealistic (a human skin can be blue, a tree can be pink or a windmill purple), yet carefully chosen so as to create a harmonious colour palette, vibrant colours in Miller’s practice are there to signify to the viewer that what they see is a highly subjective re-examination of reality, seen through a lens of memories and feelings. Re-elaborations of the subconscious in the form of free, often paradoxical associations of people, places, buildings and objects which would not be possible in real life, his works are mesmerizing lucid dreams. At times, their suspended, hallucinated atmospheres leave the viewer puzzled, prompting them to revisit each image multiple times.

Particularly intriguing are the paintings set in carefully designed interiors, where the artist’s eye for architecture is particularly evident (Fig. 6). In these works, much like David Hockney (whom, non-surprisingly, he acknowledges as his greatest reference), Miller gives us a vantage point from which to witness and participate in queer life — making us, whether we like it or not, voyeurs.

The representation of queer life he offers us, however, is neither documentary nor pornographic but always one filtered through the prism of his emotions: in his lysergic, non-realistic portrays of friends and lovers, the interplay between people and the spaces they inhabit always suggests revelations of the soul. “With few models to draw upon in the tradition, the notion of “queer space” is all but a given – it is something many gay people taking their first steps in the gay world have to create by themselves, an exciting and frightening task at the same time. For this very reason, queer space is often an emotionally charged space.” From Miller’s perspective as an artist, a very colourful one.